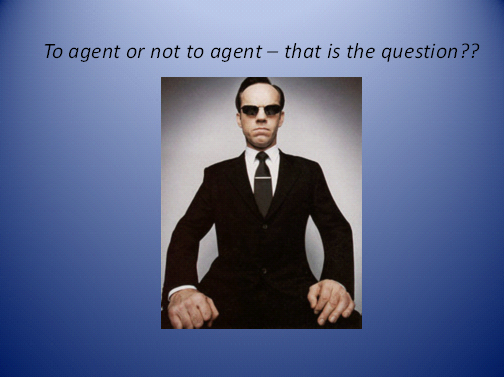 As someone who didn’t have one but has had some interest and even rejected a few agents I think I’m in a good position to speak on the subject, I think the best way to answer this is to put you in the seat of three different types of authors. Number one; someone who is just doing it as a bit of fun or as a legacy, so you written something silly or a bio on yourself but you don’t think it’s going to sell, you just feel that you have something out there, something to say you have been on this planet, to leave your mark. Does this person need an agent? Of course not, they don’t have the aim of being a professional writer or ambitions in that area, they are just doing it for fun and can afford to just ‘put it out there. The second person is a writer like me, someone who accidentally started writing and just has had a fair bit of success with it. Now this is a difficult one, if you are ever in this situation take your time with the decisions you make. Using myself as an example, I make enough money now to live off, but it may all disappear next month or the month after which is terrifying, so of course I want to be secure in my position. I have a number of books finished or close to and therefore enough to take the emotional and physical drain of launching a new book every six months as I have plenty of material. There is the advantage that I don’t pay a cut to an agent so I keep all the money I earn whereas with an agent I would have to split it but the price here is that I have to do everything for myself – so that is a burden that an agent could take off me. It’s also a question of growing –  I’m only 24 and I want to sell more and more books, I want to broaden my market, I want new people to read them and that is why I ask you guys to post or share my stuff to bring people in. For authors like me  you have to rely on your audience being willing to recommend to others as you don’t have an agent working it for you.

I will be candid here, I have around 1000 hits on each post that I put out on my site – from which I sell a few hundred a week – which is very nice, but I have been around that mark for two months with no growth! Is that me and my content, possibly, or is it the limit of my reach. I have to think about that – my reach is very dependent on the network of readers, if you shared this with ten friends or posted my book page to twenty people, and if everyone reading this did that then I would jump by 200% to 20,000 for something which is quite easy if you get the right conditions. I mention this not as a prompt for you do to do so(although you can if you want – I won’t object!)  but more as a example  – development of a further reach is key to secure your position as a writer, a move from say a 1000 to 20,000 hits would mean a lot more eyes on your work with the chance of  kick start onto a semi viral sale, but this would require every reader to pass it on to someone who buys and passes it on – 100% pick up just doesn’t happen – a good proportion of you are not going to do that, for your own reasons of course,  so in reality the eyes on a book to get a sale needs to be huge. What about media you might ask, well those of you in the UK will have seen that I have been in the press lately but even that doesn’t bring thousands and thousands buying – it helps but you only have to look at the analytics – I’ve had half a million people see my book but sold a fraction of that and that is the norm for all of us – you need massive numbers to see or hear about your book in order for a small proportion to change into a actual sale – so you need a agent who is going to get you seen by more and more people, more and more often, to get you into the lucrative numbers game.

The third type of author is the one who studies writing and for reasons unknown even to themselves have just always just wanted to write and set out from early on to either write or work in the literary world and write on the side.  They may become a publisher or agent themselves. So my conclusion if you want to make a living from writing you will, at some point, need an agent.

Unless you are incredibly lucky you are not going to have some breakaway viral success, so even with modern technology I think you will need an agent or at least someone in your corner helping you. Saying that I don’t really want one, I make enough money to be content but like anyone else, I would like to sell more and if I had my own way I would work directly with a publisher but the likelihood of that is remote.  It is only celebs who might go direct to publisher but even they will have their agent, just not a literary one.  Agents do have the market sewn up so it is tricky to get to a big publisher without them. I only have to look at my position – I’m in the papers, I get decent traffic on my website so have a solid base to build off and two books ready to rock and roll, written, edited and following on from the two already selling – but no big publisher bagged and I haven’t got an agent so reluctantly I have to concede that to move things up a gear, you do need an agent.

Meanwhile, if you are a struggling writer or just someone who found this interesting, why not help a brother out. Post this link to your facebook, twitter, instagram or whatever and let’s see if by sheer human goodwill I can get enough attention to force an issue with a big publisher and shake up the book game by hopping over the agent fence and opening the door to a direct channel.