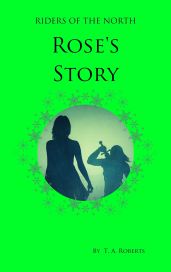 Rose just doesn’t fit in, and never has. She knows she is different but she doesn’t understand how or why – she is about to find out. Magic, mystery, enemies and, at last – friends, are all encountered as she begins to find her place in this world and discover her vital role in a bigger story that is yet to unfold.

Chapter One: The Outing

“Come on, Rose. What are you doing? Let’s keep up shall we?” Rose pulled the small hamper up and, clutching it tightly with both hands, she staggered up the hill. Her long, gangly legs stumbled her up in an ungainly fashion. She went at a slow pace, loitering behind the rest of her class. She didn’t understand why the monks of Alveren had made them go on this outing. Thinking about it, she didn’t really understand much of her life out here in the middle of no-where, on an island with a few thousand inhabitants, an island sitting at rest in the centre of the Great Waters that defined the land mass of the Empire of Capricorn – she had never left the island, she didn’t know what life was like anywhere else, she just knew that her life here was not the one she wanted.

She struggled up the last few yards and over the rise, stopped and drew in a deep breath at the view “It is beautiful, isn’t it?” Sister Non spoke Rose’s thoughts. The nun caught her eye and smiled at her. Rose thought she must be in paradise as she looked across and down to the large lake that sat in the clutches of the three mountains that made up the spine of the island. The water shimmered as the early morning sunlight danced across the silent, bright blue surface – the water, the lifeblood of all on the island. Rose wrinkled her nose as she looked to the left of this extraordinary natural beauty, her eyes slowly scanning down the gentle mountain road to the huge dominant tower of the Mages, a shape that hovered like a giant predator waiting to consume them all. Unusually, for that moment, she felt in tune with everyone else in the group, as they stood taking in the Isle of Man, where it was said that man first stood. They all looked at the Keep; a structure they all hated as they hated the people inside it, the Mages of the Empire. The Mages didn’t help this view of them as they isolated themselves in their keep, secure in its huge, thick, stone walls. The Mages didn’t communicate with normal people, beyond allowing the monks to venture in to deliver food, drink and other materials, most of which had been taken from the inhabitants of the island. The monks seemed to worship the Mages but the people detested them and everything they stood for. Rose pondered on this; even the beauty of her surroundings could not pull her out of the dark mood she felt herself slipping into again.    “Rose, come on child! Bring your hamper and we will sit down here.”……