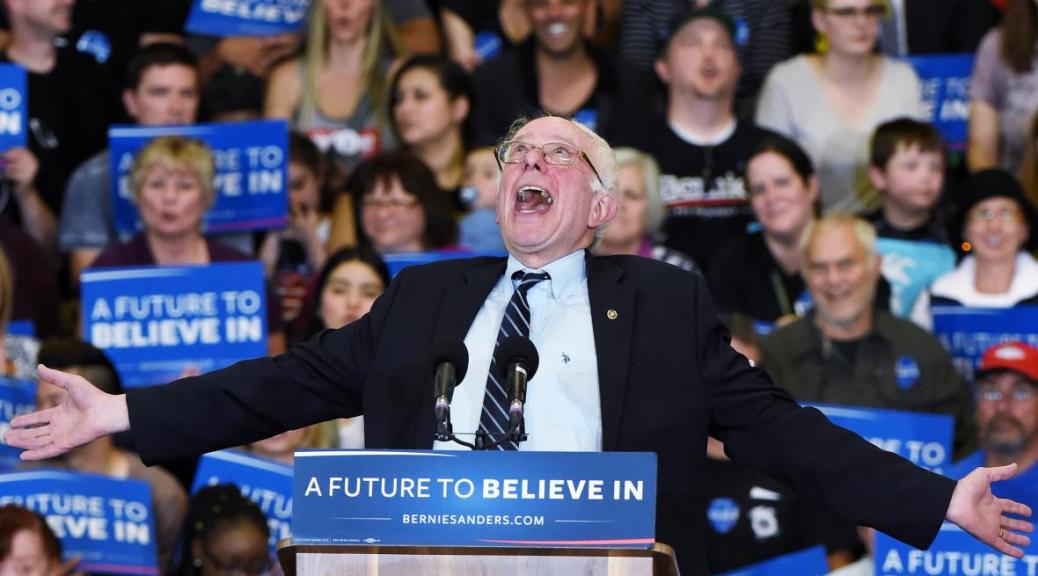 Following on from my article earlier about the British PM, I thought I’d share my observations about something I think most of us have noticed!
With most media attention on the circus show that is the Republican candidacy, Bernie Sanders, and the Democrats have slipped by silently for most of the campaign so far but, with Bernie’s historic win in Wisconsin over the weekend; he looks like he’s on a roll which could bring about one of the biggest upsets in New York later this week. Is this a political revolution, as Bernie has been saying from the beginning? I’m not just looking at the United States here, but consider what has also been happening with other nations around the world, such as the shock election of Jeremy Corbyn to lead the Labour Party in the United Kingdom.
The signs could indicate that there is a majority of under-30s who are now more politically engaged than ever before and times may be changing. Some of the statistics do seem to back this thought up. Clearly in the U.K. there was a growth in first-time party membership of under-30s, and there seems to be a generation of young American voters across the pond, who have no affiliation with Hillary Clinton but are connecting with Bernie Sanders. A long time left-wing socialist would have been an unlikely candidate in the past, now here he is, going head to head with Hillary Clinton. Just ten years ago that would’ve been almost unthinkable, same with the left-wing in the UK, so what has happened?
Firstly and foremost, as I mentioned before in some of my other articles, as a result of the economic crash, most people my age and younger are in economic decline and find it incredibly difficult to survive; buying a house, or just getting on with life is so much more difficult now and whilst the older generation look to the entrenched, complacent, wealthy elite to rule them, the likes of Bernie Sanders and Jeremy Corbyn, who have kept their principles, now speak to the younger generation, to the people that desire a fresh start as the old guard has let them down. They seek a new direction, an honest, fresh approach to the economic issues they face, because the fact is that the younger generation, almost across the entirety of the globe, will not do as well as their parents –a generation who benefitted from a better world that their parents created for them, but they, in turn, failed to protect that world and cannot hand it on, who are now young adults and disaffected – this is obviously pushing forward a wider political revolt against the entrenched systems and highlighting the class divisions.
Alongside that you have the realisation that most young first-time voters, and people in the mid-20s, know little about communism, as the fall of the Berlin Wall happened before most were born so young people see Communism as a new approach. And so, with the economic instability of most western countries today: and the fact that most people are disenfranchised with politics and politicians then it is inevitable that more radical groups will come to the fore.
The difference, this time, is that these ‘radical’ groups that most young people associate with in terms of wanting change are actually the moderates, the middle grounders, the liberals. So as younger voters turn away from the circus tricks of the traditional political scene that you see with the Republicans or the Conservatives, there is a quiet rebellion gathering in the shape of Bernie Sanders and Jeremy Corbyn, the younger voter is moving against the establishment, personified in politicians like David Cameron and Hillary Clinton
The question to pursue and seek out the answer to is this, will this rebellion, revolution, succeed? Will we see a leftist government in the United States, and the United Kingdom with President Sanders and Prime Minister Corbyn? There was much written in the sixties about the children of the sixties rejecting their parents’ world – perhaps the reality is that the children of the nineties are rejecting their parents’ world – and it could be that the two powerful countries may change dramatically; for better or for worse, it is exciting!
Source: Roberts Ink