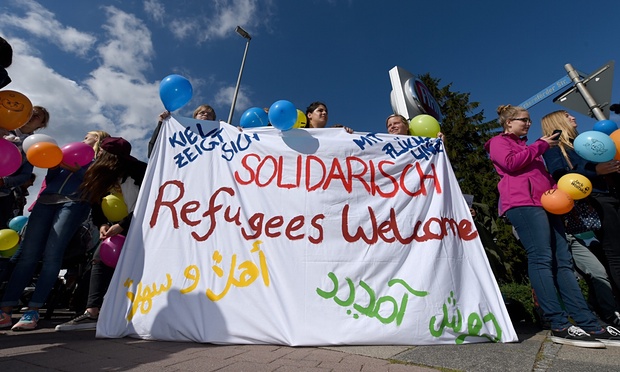 Hello and welcome to ‘The Week’, to all new and old readers. This week I thought I would talk a little about the separation of community that I have observed to huge affect this week as well as the negative side of social connectivity.

So, if you been paying attention to any kind of news from local to social you will have heard or seen the crazy and troubling scenes from all around Europe with large numbers of migrants trying to make it to Europe via Austria, Turkey and of course crossing the med. I’m going to talk in depth about this huge global issue in a new series starting this Wednesday. But today I’m going to talk about us as a community, or lack of community, in the face of such human suffering.

I will start with the internet as the best place to start. The Internet is wonderful thing, it’s some where that we are all, apparently, equal, it’s also somewhere you can speak your mind and try to connect with people who think the same way – kind of like what I do I suppose, the internet has given me the job I have always wanted, deep down: to rant and rail against the world and its injustices. It’s also given me the platform to write and sell books in fairly large numbers (thank you) so with out the internet I would still be working at my last job, so I’m hugely appreciative of it and grateful, but I’m not blind. The negative issues the internet has created are equal to the opportunities it gives. But my real issue is the effect it has had on us, the young.

And this is what I mean when I talk about community. If you look back to the 80’s, and even early 90’s, there is evidence that village community and national identity still existed in most of our country but where is it now? National pride still exists, some would say too much, but national identity does not. Why is that? I believe national identity has been broken down because there are no successful or powerful people worth following, no admirable model of human kind for people to aspire to be like. Just look at the USA and Donald Trump, if a man like that can be successful to the point of maybe running for President then that is a clear sign that your country’s national identity has been corrupted – same as David Cameroon here in this country, a man who has never had a real job, someone who is part of the aristocracy running our country – it is no wonder that Britain’s identity has slipped away to nothing, ask yourself, what is your identity?.

Without our identity what are we? as a community? The United States has its rag to riches stories, successful people to lead the country but instead it is being ‘led’ by random celebrities and singers and take a look at the effect on its youth. A babble of poorly educated idiots, with a lack of understanding. This may sound like an attack on the young but it’s not, parents and us, the 20 some-things have to put our hands up and take some of the blame. Who watches all these reality shows about stupid women and idiotic men? Who makes it cool or popular to watch them? We do. My generation has become synonymous with material things, superfluous things. Is it to do with the Internet?. I believe so, the nature of us all being online and plugged in has created a huge issue with what is popular, what is cool and what we aspire to. It’s easier to laugh than be supportive so we talk about their imperfections, rather than marvel at how well someone our age is doing or to look up to some one. The internet has made us believe that we need to be cool and ‘adult’ about this and not to be impressed by people accomplishments – so we jeer because their success shows up clearly how lazy and boring we are. So it’s easier to sneer than follow and because of this there is no one good to follow, no light in the darkness because good people don’t sell magazines or are of interest to the media – the good people just get on with their lives and the idiots and tools of the world flourish.

You may be sitting there now saying ‘I only watch shows like #the only way is Essex to laugh at them’ – Yes, that is part of the problem. You might see how stupid they are but you are helping an area of entertainment be popular and that is negative to the human conscience. The issue being that younger people, up to 17, don’t realize you are mocking these ‘celebs’  –  they have grown up with these reality stars being big things, due to mocking, and seen that all you have to do to be successful is be an idiot and some day some company will throw money at you. That can’t be good. Consider, if some one like me, a load mouth writer who cares about the world had as much of a following as Katy Perry or Taylor Swift or one of those reality stars like the fat butt girl, whatever her name is, and instead of me using that massive amount of fandom to be ‘look at me, look at me at this beach or party that you can’t go to’ – if instead I was saying ‘look at this, I’m going to go help in Africa, come help or do something to support, would the teenagers be very different people today? I believe so.

This is the reality of our lack of community – they don’t exist because we forced them not to. We  have created children and young adults and even 20 some-things to be ill equipped to face life due to a lack of understanding or care about the world around them, they have no positive role models to look to for guidance.  I’m fairly squared away now but life is still really hard – I want to go help these people or point out their suffering but I can’t influence anything, I have got to flog my books and run my business so I can live. I feel alone on the battlements and there is no one for me to look up to.

Think about that for a second then look at the world. If this had been back in to the 50’s or even 70’s I have no doubt that fishermen, pleasure boats, ferry companies and the like would have sent their ships to help the migrants. Food parcels and blankets would have been crossing out from Britain like crazy. Why, not because they were better then us, our parents aren’t but way back folk were, at those times community meant something. Some bright spark in the community, who others looked to would have said ‘Come on let’s help, Sally you’ve got some old bed covers and duvets, lets send them.’ Or ‘I’m going to take my boat and help.’ And others would have followed. Today, due to the Internet and the break down of our communities. nothing of the like happens. What do we do now?  In the place of real action we now get Twitter campaigns like ‘Bring our girls home’ or the ice bucket challenge or this latest one ‘refugees welcome’ aimed at our leaders after the tragic picture of a child dead on a beach. These are not community things or call to real action, they are marketing campaigns by the already successful and thus do nothing at all – no physical response which I find despairing, to the point that I feel they are disgusting to participate in. Now you might say they do bring attention to the issue.  And to that I say, rubbish – it’s not attention these things need, it’s a real response – action, resources and man power not attention – it’s happening now. Post WW2 our nation was made of people who had seen dreadful things and they knew how important it is to reach out and help each other – the children and grandchildren of those people just comment and do nothing.

The most damning thing about our lack of role models is this. Not one billion or millionaire, of which there are thousands now, has taken their super yacht and gone to help pick up refugees at sea, not one, and I think that speaks volumes for our ‘community.’ Maybe the wrong people are leading us or guiding us and it is crystal clear that the wrong people have the money – they could make a real difference and they choose not to – So Up the Revolution!!!  –  Oops, sorry, I almost forgot I was British then!!

Thank you for reading. A new series will be coming out this week. If you enjoyed this then please share. I do enjoy shouting at people in the position to do things. If you feel inclined, I would appreciate it if you would pick up one of my books Link to Rose    Link to Horse Lord  I’m getting quite a lot of press attention at the moment so you never know maybe I will be one of those role models one day, that would put the fox in among the chickens wouldn’t it!!  (ha ha!)

If you want to help with the refugee issue I recommend you give to the Red Cross aid campaign running now or Oxfam – both will see your money gets to the right place.  Red Cross      Oxfam     If you don’t want to spend any money, either because you don’t have any (give your time instead?) or you have no heart then at least share this blog  – maybe people you share it with will take some positive action.

See you next week for another episode of The Week.